​Innovation is at our core.  For more than 85 years, we’ve been focused on saving and sustaining lives and elevating patient care. ​1930s: Our First Decade of Innovation

Not long after our founding, we introduced the TRANSFUSO-VAC container for blood collection and storage, which made blood banking practical and allowed storage for up to 21 days.

By the decade’s end, we changed our name to Baxter Laboratories, Inc. and opened our first manufacturing facility in a renovated automobile showroom in Glenview, Illinois. 1941: We introduced the PLASMA-VAC container, which for the first time allowed plasma to be separated from whole blood for storage.

1948: We launched an unbreakable plastic container for blood storage.

1954: We went international, opening an office in Belgium. Two years later, Dutch physician Willem Kolff developed the first “artificial kidney,” which was made from wood slats, orange juice cans and a cellophane membrane. Building from his work, we produced the first commercial dialysis system later that year.

1960: We introduced the first peritoneal dialysis (PD) solution. PD filters waste from the blood of people in renal failure through their peritoneal membrane rather than an external dialyzer. A year later, we began trading on the New York Stock Exchange.

1970: We introduced VIAFLEX, the first flexible, plastic IV container. This medical breakthrough allowed infusions within a closed system, which reduced the chance for contamination.

1971: Our company joined the Fortune 500 list of the largest American corporations. We also opened an IV solutions manufacturing facility in North Carolina – to this day one of our largest.

Our MINI-BAG plastic containers came on market in 1974, making ready-to-use premixed drugs available to hospitals. We moved to our current headquarters in Deerfield, Illinois, the next year. We launched several products in the 1980s, including the INFUSOR pump, which allowed patients to receive IV therapy in any setting.

1998: Our acquisition of Ohmeda’s Pharmaceutical Products Division made Baxter a leader in inhaled anesthetics.  That same year, we introduced the first triple-chamber flexible container for total parenteral nutrition and gained approval for our TISSEEL product, the first fibrin sealant in the U.S. 2000s: A New Millennium of Innovation

The early part of the decade was notable for a series of regulatory clearances for some of our core products. These included: 2011: Baxter Ventures launched and became a new way for us to identify and fund healthcare innovation. We also acquired Baxa Corporation to enhance our pharmacy automation offerings. 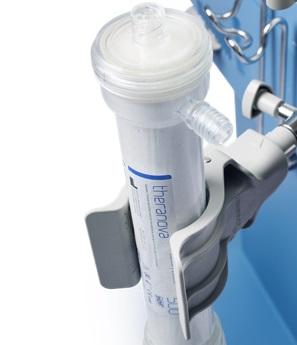 2015: We spun off our BioScience business to focus on hospital, nutrition, renal and surgical care. We also launched AMIA with SHARESOURCE,  the first APD system with user-friendly features that help guide end-stage renal disease patients through home peritoneal dialysis (PD) therapy, while keeping them remotely connected with their healthcare providers.

2016: In Europe, we launched NUMETA G13E, the only triple-chamber, ready-to-use parenteral nutrition system approved for preterm infants. Also, HDx enabled by our THERANOVA is a new dialysis therapy we are pioneering for patients with end-stage renal disease. The THERANOVA dialyzer features an innovative membrane, which provides an expanded hemodialysis therapy (HDx). 2018: Our KAGUYA APD system launched in Japan, reflecting local needs and demographics, and making it a viable treatment option for renal patients there.